This is how the scene here appears in the south of Tripoli neighborhoods that were exhausted by the war launched by Marshal Khalifa Haftar in April 2019, where this war put sharp and prominent marks on each of its homes and its every corner. Here is a simulation that may seem to many people fictional for tragic stories, but the...
Publish Date: 2020/07/06

This is how the scene here appears in the south of Tripoli neighborhoods that were exhausted by the war launched by Marshal Khalifa Haftar in April 2019, where this war put sharp and prominent marks on each of its homes and its every corner.

Here is a simulation that may seem to many people fictional for tragic stories, but the truth is clear on all walls of Tripoli through witnesses and testimonies of its inhabitants who left it under force and returned to it disappointed.

Pictures of some neighborhoods affected by the war in Tripoli.


All doors are closed!

From its current place of displacement, since early April 2019. Retaj Al-Issawi - 20 years old did not hesitate to share the story of her family, who is living in the darkest humanitarian conditions due to the war.

Here Ritaj did not find her way between the burning walls and the corners of their stolen house, from which only small pieces of furniture were left that turned by fire and deliberate sabotage to ashes and crumbs. Ritaj and her family did not envision that the damage to their house would be this severe especially that they have longed to return to.

Retaj says that she and her family left their home more than a year ago in the early days of the war when the fighting got heavy on the outskirts of the city “Wadi Alrabia” specifically, the family of a father, mother, older sister and a brother plus a missing one for more than two years now, were displaced, without taking any possessions or identification papers from the house, leaving behind everything they own.

“When we left the house, we only took what we were wearing, no clothes or even papers” 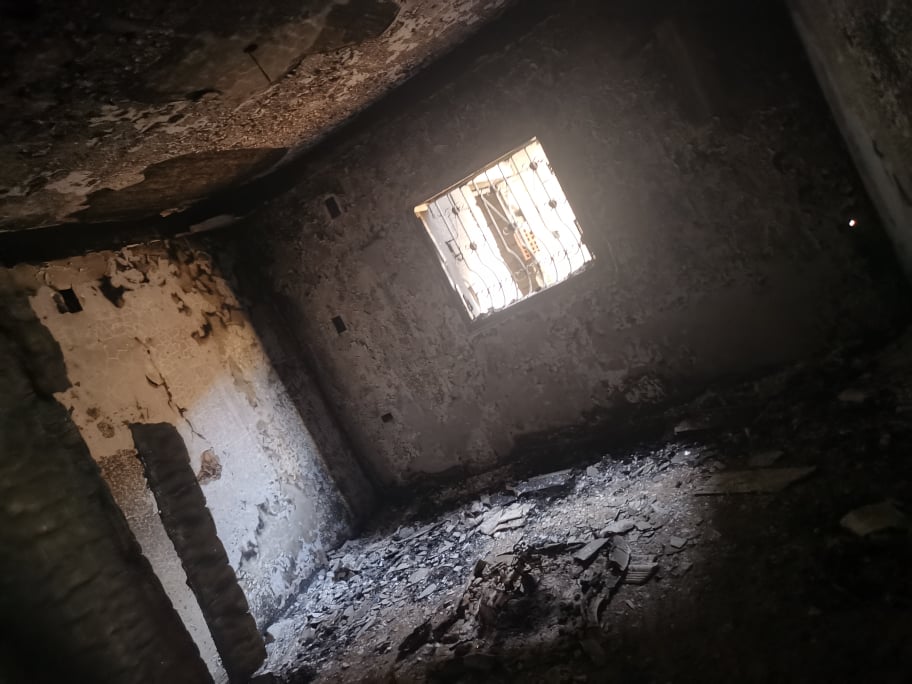 Retaj continues to talk about their tragedy, which was exacerbated by the state of the diaspora that they lived through during displacement. After the battles stopped and the gradual return of the displaced, Retaj family received the shocking news that their house became rubble after it was burned and stolen. The news that was for Retaj’s mother, the great catastrophe that made her collapse healthwise, which led to a stroke, in addition to other health problems such as kidney failure and blood pressure issues, that made Ritaj family think only of treating their mother as a priority for them and their dilapidated house is outside the family’s calculations for not being able to afford any amendments, even in a simple way, to restore it.

“Now we only want to gather money to treat my mom, we didn’t even start thinking about the house”

In addition to the tragedy of losing their home and their family's diaspora for a year, today they live in a basement (Revodjo), turning it into a house in the “Birr Al-Asta Milad” area with relatively high rent compared to their financial situation, as the place lacks ventilation, good quality, and basic living essentials. However, the family is seriously considering relocating to another house, which may be less expensive and further away from the city center.

Like other IDPs “Internally displaced people” who have not been able to return due to the destruction of their homes, all doors were closed to Ritaj family, despite their attempts to communicate with their municipality or obtain compensation opportunities, even if they were futuristic - but she regrettably says: we did not find any solutions for our home renovation or material compensation to return or for re-maintenance or even documentation of our current situation, as the area became non-livable again, as the infrastructure is completely destroyed, electricity and even roads, as are weapons and household waste Scattered everywhere.

Amer visited their house with his neighbors to inspect the “Al-Khula” area, south of Tripoli, for the first time, after nearly a year of displacement. all valuables have been stolen and some other things like water taps and internal power cords, even the items that were not looted were completely destroyed by fire. In one of the rooms Amer was trying to inspect anything is left to survive, even the window in front of him, he said, "It also cannot be maintained and it’s completely unfixable" He wandered around his house, which was one of the focal points in the front line for months, trying to calculate the cost of war on their house, he went out to the street looking at the other houses in the neighborhood which somewere more damaged than his own to console himself, and he says that his condition is better than some people who found their homes a complete wreck.

Between the weight of previous wars and the catastrophe of this one, civilians fall victim to all of this. Here the architect Muhammad Bashin portrays what he watched during the flight of his displacement from his region (Al Hadba Project), which he considered an area that included many headquarters and barracks of the armed formations in the capital, and that made it an unstable region over the past nine years.

Bashin says that their area is the last to have been displaced at the beginning of January 2020, where the displacement was like other IDPs, I lived in this area, as other people who had options and other alternatives, (some people who are considered more vulnerable than others were forced to stay in schools or public places (centers for the displaced)), ss for his family, they had the option to stay in the family’s big house (the grandfather’s house) with the possibility of visiting their home whenever the opportunity was available, despite the perilous dangers in the region, is a military and closed zone.

“Even if you were a millionaire, it’s never easy to be kicked out of your home”

With disappointment, Muhammad tells us that they were expecting to find their home in its first condition since the last time they visited it last Ramadan with some minor damage and thefts, but the surprise was when they found more than half of it burned down with the loss of almost all its contents, especially after it was exposed to a projectile that damaged the ceiling and made half of it fall. The greatest shock, according to his description, was the loss of all research and work for his father, a professor in biochemistry, in addition to the loss of many documents, testimonies and memories that belong to the family.

“Every situation is better than another”

As for their plan after the war stopped and they were able to return, Muhammad says that they are in the process of legal documentation by opening a record in which all the damage to the house will be documented, then proceeding to assess the damage and cleaning and maintenance work even though it will cost a large amount as he put it, but Muhammad family accepted reality and began to deal with it directly and practically without waiting for any government assistance.

In an interview with Dr. Muhammad al-Fadil Jibran, head of the Higher Committee for the Return of the Displaced personnel, which was formed based on Resolution 523 of 2017 on the Presidential Council.

Dr. says. Muhammad said that the committee contributed to opening paths and places to receive the displaced in coordination with the municipalities. The committee also works in coordination with the Ministry of Interior, Tripoli police department, and the Center for Social Affairs Studies by preparing a form or questionnaire in order to limit the number of affected families who wish to return to their homes. 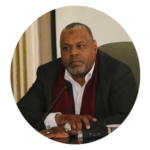 Dr. Muhammed also assured us that all municipalities cooperated with the committee in registering families within the system of the Social Solidarity Authority, in which the number of IDPs registered in them up to date of this dialogue reached nearly 56,000. The return process is still relatively suspended in some areas due to mines and the lack of security and safety for the displaced families.

And to document the damages, Dr. Muhammed adds that every municipality has a system through which it records the damaged homes after bringing a letter from the mayor of the locality of the area where the displaced person lives, stating that he was affected by war and filling out all his required data within the form used, where he will make the displaced person officially registered within the system.

Dr. Mohamed also added that the committee presented a proposal to the Presidential Council in order to give the displaced people financial assistance of1500 dinars. However, this proposal was not initiated and disbursed - high prices and rents estimated between 1,000 and up, due to what Dr. Mohamed explains that the implementation of the proposal by the emergency committee has become a marathon, where the proposal was submitted in June 2019 and forwarded by the Presidential Council to the emergency committee, and settled in there at the end, to take over the task of implementing the proposal to the Social Solidarity Fund without the presence of any assurances that the submission of any assistance to the displaced.

As for our question whether the state will directly compensate those affected by war, Dr. Muhammad said that the committee presented a proposal to the President of the Presidential Council, “Fayez Al-Sarraj” in order to create a “reparations fund” which Dr. Mohamed described as a fund to help those affected by the war. All armed conflicts since 2011 and compensating them for the damage they suffered, even partially, as this memo was approved within the general budget proposal, but the executive body was not formed to conduct the fund’s work, which makes this proposal not officially activated.

Pictures of some neighborhoods affected by the war in Tripoli.


Despite all the answers we got from the head of the Supreme Committee for the Return of the Displaced, we did not find through all the inactive decisions, the outstanding proposals, and the formed committees! A clear answer confirming when or how those affected by the war will be compensated. To keep this file open with thousands of affected people who are unable to return due to their destroyed or semi-destroyed homes due to war.

This article has been translated from Arabic to English