The mines in Benghazi: (The Invisible Death)

After a war lasted for more than 3 years in Benghazi eastern Libya, some of its people were displaced, others escaped from the mines in their homes...And bringing them back was the greatest problem for those working in the Military Engineering Department who are responsible for detecting and dismantling mines.
Benghazi,Mines
/
Publish Date: 2017/10/23

While walking in Alsabry and Souq Alhoot  neighborhoods in Benghazi, you would  find the desire of returning home and nostalgia, the death you never see coming, the hidden truth, homes surrounded by mines, buried with no coffins, here you find streets surrounded by terror and fear.
After a war lasted for more than 3 years in Benghazi eastern Libya, some of its people were displaced, others escaped  from the mines in their homes...And bringing them back was the greatest problem for those working in the Military Engineering Department who are responsible for detecting and dismantling mines.

Mines have never stopped killing innocent people in Benghazi and destructing houses, also minimizing the chances of living a normal civil life to those survivors. In addition, the mine have taken the extremities of many youth while doing their duty.
Here is a story of Mahmoud Alferjani, a young man in his early 20s, who volunteered with the military engineering team to detect mines and recently became a victim of it.
Mahmoud was injured at AlSabry while doing his duty, one of the mines exploded while he was dismantling 8 mines inside a house for a civilian. 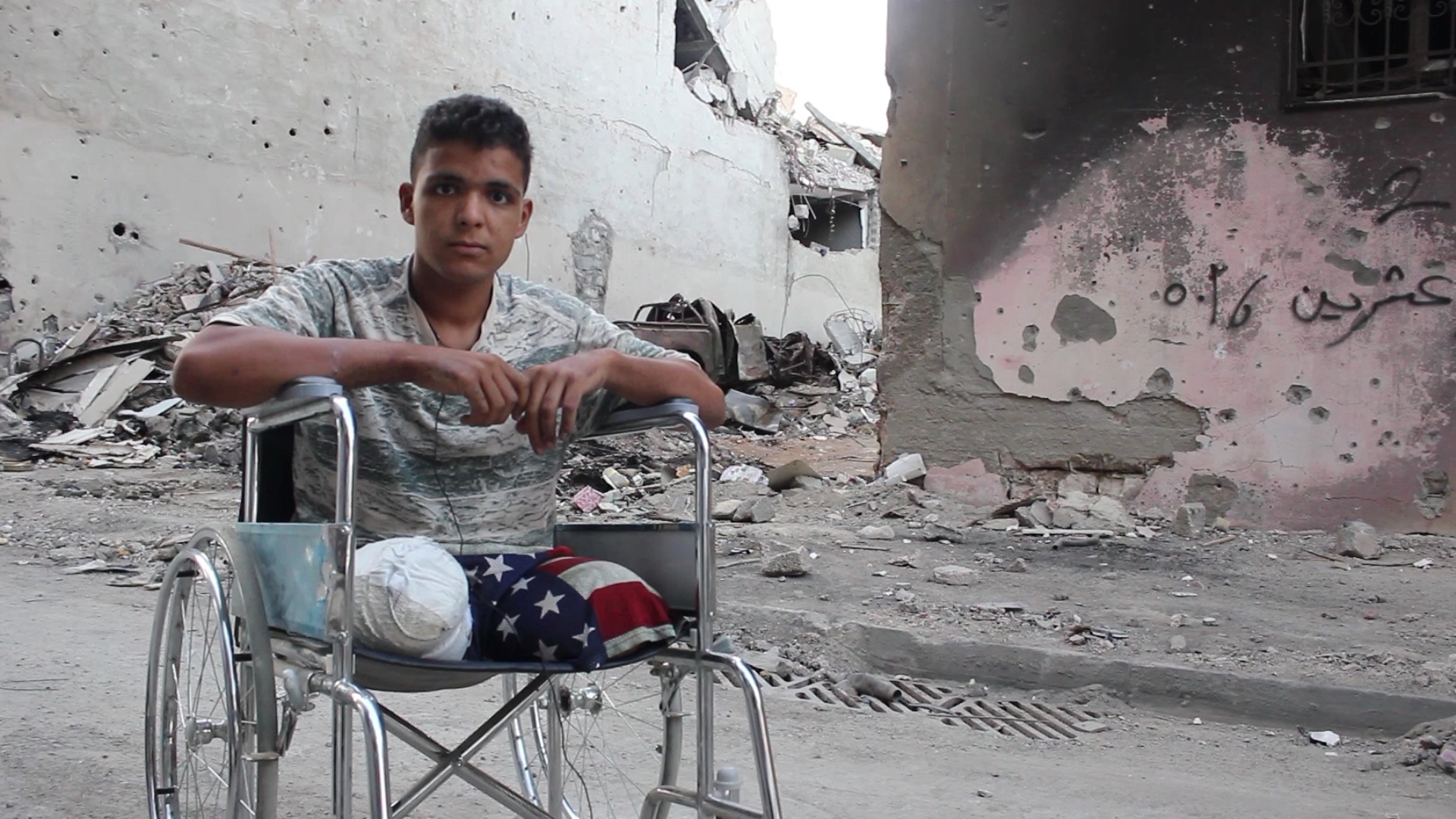 Mahmoud says that tools he used were very  primitive  for example a knife or a screwdriver, due to lack of certain  equipment used for the TNT.
Despite having these simple equipment, we fight every day to do our job and help the displaced people to return to their homes.
Today, Mahmoud lives as any other victim of mines, living a real misery to move on with his life as a young man wishes to live, work and study as people in his age. After he lost his both legs, he started to suffer spending the rest of his life on a wheel chair, moving through the streets memorizing what he has done with his colleagues and what he couldn’t do due to his injury.

Despite all the efforts  spent by the  Military Engineering team have done in order to  dismantle  mines inside the houses and neighbourhoods, theylack potentials and required  equipment that will help them detect and dismantle mines very quickly.
We talked to Mr. Jamal Muhammed Alramli, the head of the  military engineering unit and he told us about the huge amount  of challenges they face  while they work on detecting mines within areas like Alsabry, Sidi Faraj, , Abu- Atni  and Alqawarsha. He said that the mines differ based on its danger and type, also the side-effect caused by mines over homes in general and individuals mainly. 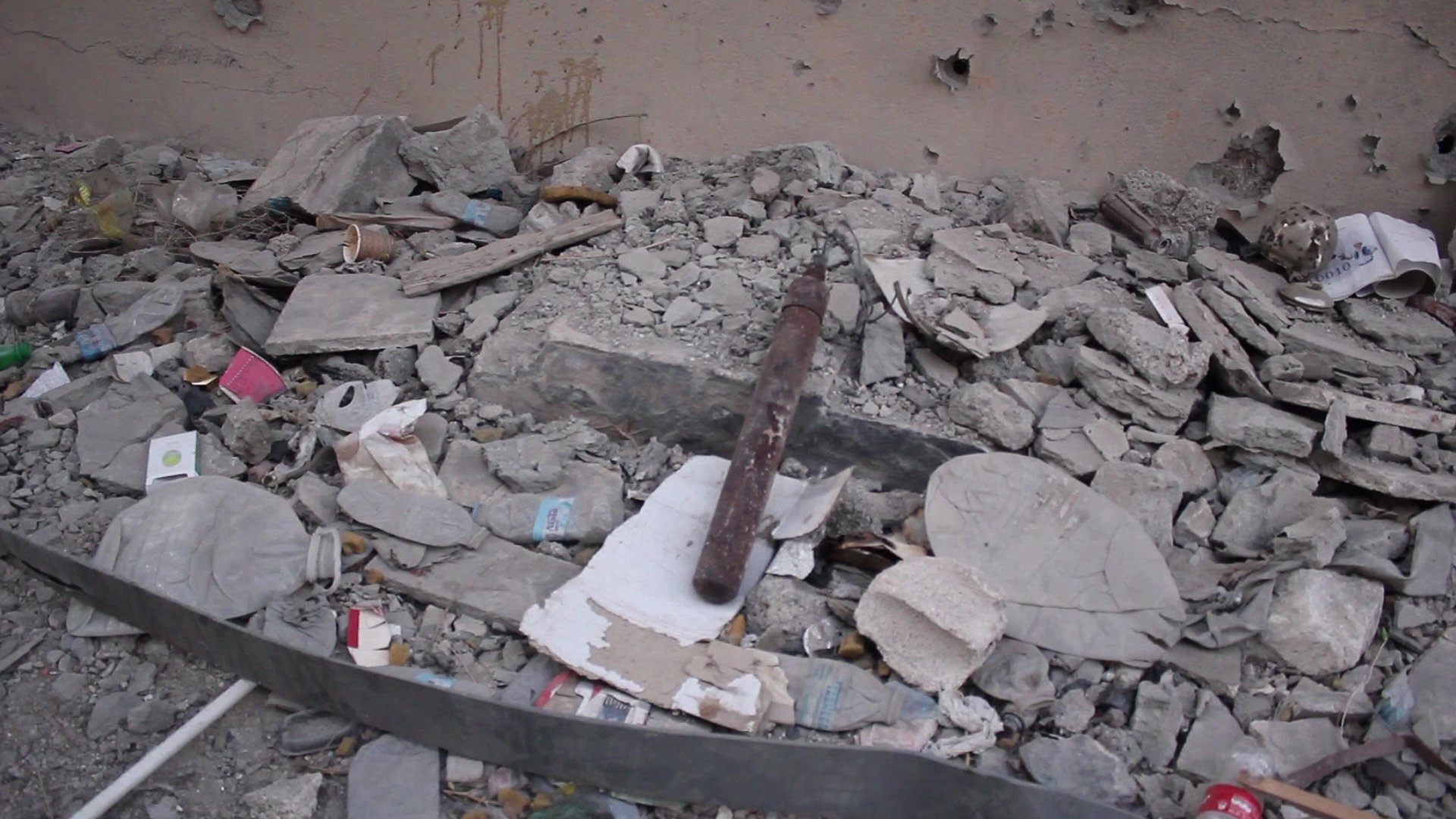 Alqawarsha is considered one of the most dangerous areas, where Alshajar St and European hospital St are located ( ISIS  main base)  where they found of the most dangerous types of  mines (wood rulers and kapsun), which have the ability to bear climate changes, high temperatures and humidity that weighted almost 6 kilos.
Mr. Alramli adds  that his team members are the most venerable people while they detect mines manually without any specific equipment or anything could protect their bodies.

Mining homes is an obvious war against civilians

Mr. Alramli assures that groups of militias  stationed inside the residential neighborhoods had booby-trapped homes before withdrawing from these neighborhoods.
He added " that despite all the United Nations’ visits to the city  and their aware of the mines detected, asking the authorities to provide aid and equipment  to help them overcome the dangers of the mines threatening life and peace. Assuring that the  limited  available equipment  may lead to  the delay of removing the mines for more than 2 years.

After the war  ended, it was very obvious to see the destruction of home, especially in Alsabry and Sooq Alhoot,  where  the areas witnessed the  war until its last days. Most ot the people living in these areas are displaced, and they are about 18,000 families according to records.
Some were able to go back despite the terrible circumstances, such as loss of water and electricity ; Others had tragic fates, dying in their homes because of the undetected mines.
There is no official statistics of the total number of victims announced, but the reports assured that 105 of the victims were civilians were killed due to mines and war remnants.
According to the statistics and numbers done by the Military Engineering team, Mr. Abdulsalam Almesmari assures that Benina, Sidi Faraj, Bu’atni, Allaithi are completely safe and free of mines and war remnants and the  civilians  are returning to their  homes gradually.
Meanwhile,  Alqwarsha and Qanfouda are considred to be 50% safe, Alsabry 30% but sadly Sooq Alhoot is only  15% .

With the  high number of mines victims, Tatweer Company for  Research in partnership with Funun  Enterprise for  Designs  and Sadim for technology  have launched   ‘Ballegh’ app, on smart phones which helps in protecting  civilians  from any weird objects or war ramanants, via taking a picture of any object suspected to be a mine, the application would detect the place of the object using GPS, on android devices, and information would be sent to the authorities (military engineering team) in order to  deal with these cases according to their priorities  and danger.
Mohammed Alghazal the CEO of Sadim says that  lunching  ‘Ballegh’ is a social  partnership between the 3 companies, which  have  always been an a goal  for the three  of us.  It also facilitates the communication between the citizens and the authorities, and  makes  their job easier.