Hijab in Libya, a habit or a devotion!

Hijab is considered one of the most important icons of clothing for women in North Africa in general and in Libya in particular, which develops with the progress of personal ideas and individual beliefs of each woman alone, in this article we review a number of women's experiences with hijab in Libya.
Publish Date: 2018/03/18

According to a study conducted by the Elbiro Foundation in January 2018, which involved 538 Libyan women about Hijab in Libya, 83% of them said that they only wear Hijab (446 women) and 17% (92 women) said they didn’t.
As for the reasons behind wearing hijab among Libyan women, 56% of them which was the largest proportion said that their main reason the religious duty according to Islamic regulations, while 26% said that social duty or the nature of society is the first reason for wearing hijab, 14% said that the pressure and imposition of the family is the reason, and 4% listed other reasons which varied between security reasons and individual protection from verbal and physical violence.

Also when we asked Libyan women what does hijab means to you? 55% of them said that it was a specially sacred dress, 33% said it was a community habit, and 6% considered it to be just like any piece of other clothes, and 7% listed other reasons starting from up to date fashion to a personal decision which does not mean anything.
The positive reflection of hijab on women participating in the study was positive for 48% (260 women) and negative (19%) (98 women) and 33% (180 women) did not know how positive or negative the impact of hijab was.

Between on and off Hijab

Many women in the Muslim world are influenced by the surrounding experiences and the factors that provide them with a suitable environment for wearing hijab or not. Libya, on the other han as a Mediterranean country, where religion is in all aspects of its citizens' lives. Urban and rural areas, as well as between all social spectrums makes a crucial factor in wearing it.
Says A. Fatima Ghandour, a master of anthropology and a psychologist, that the hijab is what obscures the other, meaning that the term has both physical and moral significance. When we look at the Libyan archives, the hijab was worn for more than a century in Libya, And in a patriarchal society which controls the male is the authority or the family, the hijab has been widely accepted by society and began to spread in this way, and that’s because the belief at the time is to block women from the eyes of everyone, whether during movement and mobility between places or in freedom of clothing, in the Fifties of The last century and during the beginning of the liberation of women in the fields of science and culture, job search and partial independence was one of the signs where hijab was only worn on certain occasions and times while traveling or going abroad, as was the concept of keeping a very small or short cover on the head, In which it does not match hijab where it does not lead to a complete cover, but merely a moral symbolism.

In the past, the question of the hijab was not as popular as it is now

A. Ghandour continued that the society was not preoccupied with the same concept and the previous interpretations of the hijab. In the end of the 1980s, however, it exceeded the limit and women became preoccupied to the extent to which the hijab was tied to religious and moral grounds. It was also suggested that women who wear hijab were respected, and trying to connect women who do not with immoral print.
Now, with the emergence of the new Islamic waves and ISIS, the concept of hijab has been greatly reconsidered, as questions are being asked not only on the media media but also at the heart of major religious institutions and Islamic think tanks. 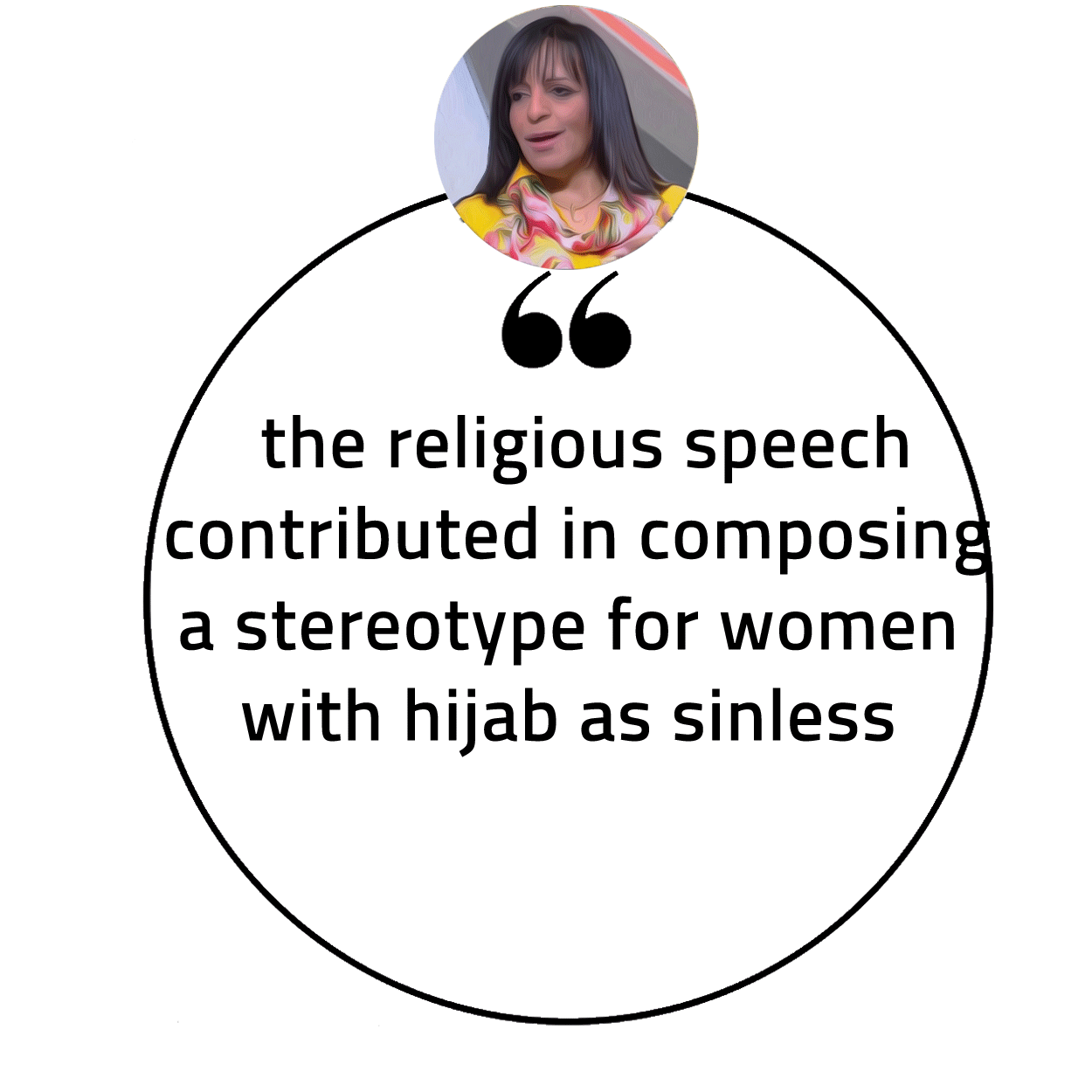 Hijab is self confidence

Some women may be hesitant to decide to wear hijab, but many are convinced that hijab is the right decision that gives them peace of mind and self-confidence.
Zainab al-Qabaali, a 22-year-old graduate from the Faculty of Economics and Political Science, and a member of the Tripoli University Student Center, says that hijab can limit physical harassment both in universities and educational institutions, as well as in the street, but often does not limit verbal harassment. And that wearing hijab must be a result of independent and personal conviction without exerting any pressure by the parents or family and this is why today many women wear hijab in an incorrect way.
Zainab adds that her experience with hijab was initially bad and did not favor it. However, with her intellectual maturity, she felt that it was a distinctive holy sanctity for Muslim women and that wearing hijab added much happiness and comfort to her life.
Zainab does not encourage wearing hijab only to imitate colleagues or just for the society's sharp look. It is also not encouraged to be imposed or prohibited within educational institutions. It is an individual conviction that should not be controlled by any external and societal influences, but in return she advises women to consider what is the purpose of hijab.

Religion is not just about wearing hijab

The psychology of Hijab

In this part, Noura al-Jarbi, 30, the founder of O + magazine, puts her thoughts on this subject. She says that for me, hijab is an ordinary piece of cloth like any other, and there is no difference between them. Hijab according to my own vision is not a criterion for anything, and it does not play a role in morality or a measure of chastity or decency in women, it is not objective to put certain moral provisions by covering a certain piece of your head.
Nora describes her experience wearing hijab as miserable. She was forced to wear it by her brothers after the recent events in Benghazi, arguing that wearing it at this particular time was a concern to avoid any problems that might occur with the extremist militias spread throughout the city. So it was not personal or individual independent decision.
She says that the element of adherence to movement and limited body language contribute psychologically to us as women wearing hijab, not only the psychological effects, but also there are important physiological effects.

The physiological effect is very dangerous, it even deprives the hair of sunlight

Al-Jerbi continues that men’s jealousy towards their wives or sisters or any woman who they have authority over is a major reason why women returned to hijab in Libya, where she described imposing hijab comes out of their love of ownership as making women a private property.

I am very impressed by the eyes of the men who stare at women especially Women in hijab, whether in the vegetable market or when I go out by car, they see that woman a puzzle raising their curiosity to know what deep down there.
Here, Fatima Ghandour said that it is not fair for a prospect to have a right to see who is standing in front of it while in return he or she is not equal in this right. The fact that women are forbidden to wear clothes under the pretext of keeping them from harassment of all kinds is an invalid argument. Today, harassment involves women with or without hijab, and harmful phenomena such as verbal abuse and violence are not stopped by the harassing party.
In addition, the presence of the hijab as a reaction to harassment or erotic instincts behaviors is not logical. Those who have caused harassment must be punished, and not the victim.
Where many clerics and preachers advocate that women with hijab do not practice violence or harm. The media of Islamic and private advocacy institutions also try to show that women who wear hijab are symbols of chastity and modesty, and this is not excluded, either women are not impeccable of making mistakes.

Sara Al-Hadi, 32, a Bachelor of Medicine, Surgery and MD from Benghazi, Living currently in the US said that she had an experience with hijab at the beginning. She was full of joy as a girl like her peers, and I was wearing it at the age of seventeen. And as many attempts to get closer to God I tried to wear the full hijab also, but over time I felt that I was not quite happy and i could not even share these feelings with my friends. 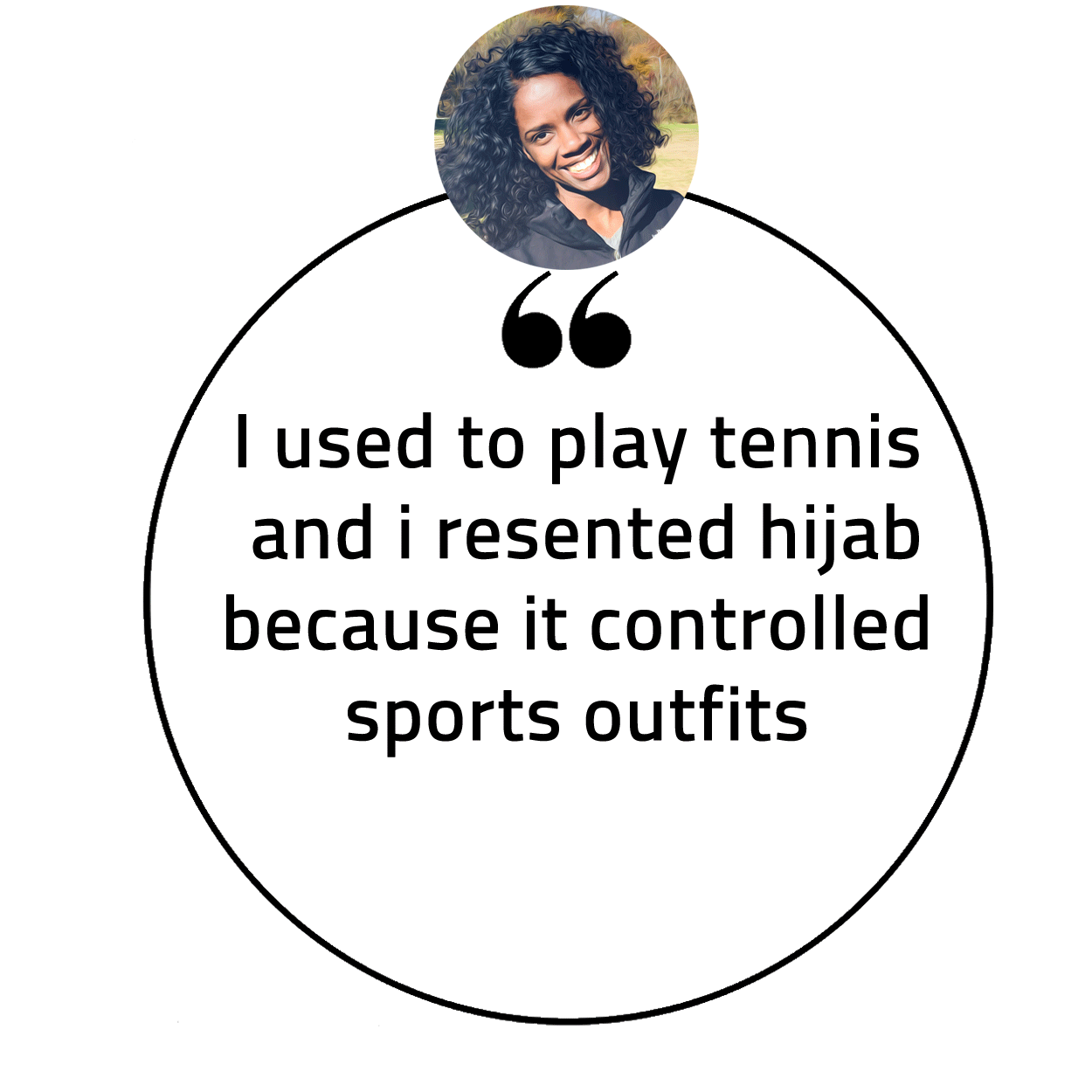 Sarah continues to ask herself the question as all these years go by. Why do I wear hijab while it does not represent me?

After getting deep in the interpretations of the Quran and the lectures of Amr Khaled, who convinced us that hijab was performed to differentiate between free and slave women, I reached a firm and stable conviction that I do not want to cover my hair to go to heaven.
Finally, after 12 years I was able to take it off, but in return the pressure of the society increased because I know very well that the reaction of is not positive when the woman decides to take off the hijab.
Sarah says that the overall effect of hijab on women is the feeling of being bound and hiding yourself from everyone. I, Sarah, felt very comfortable to take off hijab even in my personal and professional life, and the ladies who delude themselves with satisfaction when they are wearing it are actually tied and not comfortable, But at the same time asking why we put it especially during the summer where the hottest weather in, which it makes sense to wear light clothing that reduces heat.